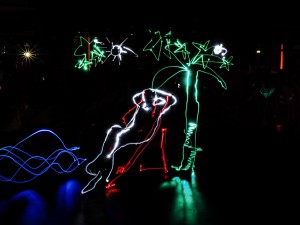 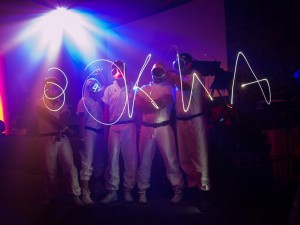 Team BuildingLight Painting: An exciting challenge for the whole team

The group is presented with a common task, which it then visually realizes in the form of a light-painting. Once the subject is decided by the group, the realization takes place as a team. Most importantly, we ensure that all team members contribute to the creation of the image.
At the customer’s request, we are also happy to accompany and moderate the brainstorming process.

Once one or more motifs have been found, the ideas can be implemented. Each team member receives a LED light for this purpose. At the photo station, the team members arrange themselves. Once they receive the command to begin, team members bring their ideas to life by drawing them in the darkened space with their lights.
Team members can write one letter at a time, so that a word is created in combination. Similarly, each individual can paint a shape that then combines with others to form a collectively created motif. Alternatively, some team members can place themselves – as if they were in a still – while the rest of the team illuminates them and ‘paints’ their silhouettes to form a specific image.
There are no limits to creativity! The outcome of each process is a unique and unforgettable picture, for which both the individual contribution of team members and their collaboration with each other plays an important role.

We have carried out Light Painting Team Building workshops for a variety of groups, ranging from 5 to 300 people. Larger groups are divided into different teams, with each team containing up to 30 members who create joint pictures in a time frame of 15 to 60 minutes.

Often, at larger events, we’ll supervise several teams at the same time. For instance, an event with 150 people can be divided into 5 groups of 30 people, with each group creatively depicting distinct company values using light art.

Thanks to our live view technique, the teams can see in real time how they are ‘painting’ with lights. This makes the process run not only faster, but also more intuitively, allowing the teams to concentrate completely on the joint process.

The resulting pictures can be shown directly to all other participants and, if desired, can be printed out and taken home. The LED lamps used by the teams can also be printed individually and taken home, as souvenirs of the event.

The images that are collectively created serve not only as a physical manifestation of the group’s teamwork, but they also work as mementos, reminding all participants of their unique experience.
Often, our customers follow a Light Painting Team Building workshop with a presentation and a party. These activities can be further enhanced with a Light Painting Photo Booth, where interested guests can continue to create light paintings with the support of experienced light painting artists.